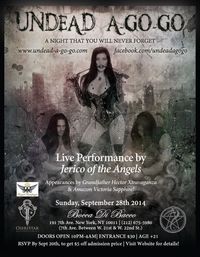 Jerico DeAngelo and representatives of his Production / Record Company . OsiriStar Records, will be attending the Miami Winter Music Conference from March 21st - March 30th. 2014.  During this time he will be taking meetings and talking business with industry personnel, and encourages anyone wishing to meet, to contact OsiriStar now and set up appointments. His schedule is filling up quickly. Thank You, Valentino D'Franco.

World Wide Release of " Be With Me " Music Video

Tomorrow at noon, January 22,2014, tune into Jerico's Official Channel on You Tube to celebrate, with him, the exclusive world wide release of his new music video " Be With Me ". He will be live on-line to respond to comments and talk to fans about his new cd and music video. http://www.youtube.com/user/JericoDeAngel0 " Be With Me" is one of two original piano compositions set to dance music from jerico's new EDM cd " SBLMNL MPCT".https://itunes.apple.com/us/album/sblmnl-mpct/id688155073http://osiristar.com/?section=productshttp://www.amazon.com/Sblmnl-Mpct/dp/B00EP52BIKtune Into : https://www.youtube.com/user/JericoDeAngel0